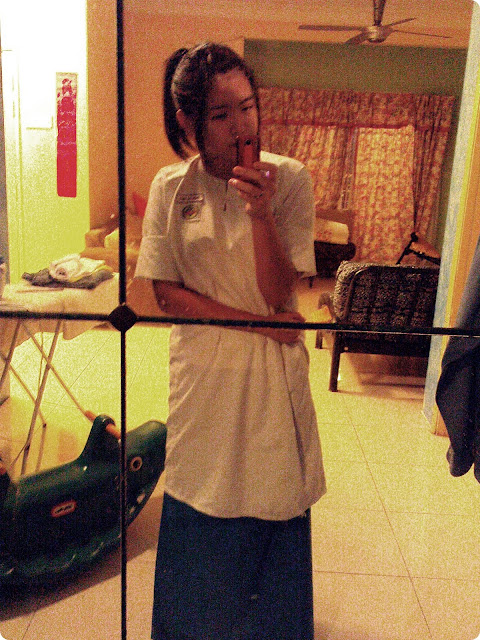 See! Yeng or not? I pin my hair up to school today :P
And i will continue doing that. Such a good girl :) Haha.
Like what i mentioned in my previous post. Today morning Eugene fetch us to school. His mama drive so fast :/ Haha. Pass him the cleanser that i bought for him. See his face so many pimples already. I feel so uncomfortable. Beh tahan then buy for him and ask him wash 3 times a day. haha. School was okay lor. Nothing special. Nothing changed. That person and I didn't talk :] Skip skip. Morning's perhimpunan was killing me. So boring D: And sitting so long made my butt sore. Don't know what occasion it was. Wonder whats so special about today. AhTeng gave us each a present. I haven't open mine yet :)

Today was the first day Pn Loo entered our class. Physics was after recess, so almost everyone was late for her class. She started nagging. She scream so loud tau. After hearing her crap for 20minutes, she brought us to the lab. Continued crapping again. OMGGG. Seriously very loud laaa.

Since i didn't take chinese. I slacked around in the library. After a while of feeling so lifeless. Went loitering around school with Pn what's her name's pass. After that was Sejarah. I swear our sejarah teacher is freaking cute xD Though sometimes annoying. She was treating us like lil kids. wtflol. She was like '6 plus 6 is 12. Dah ada dua belas markah.'. 'Macam ini ma.' 'Faham ke tak? Alaahh, kenapa x faham maa' HAHA WTFLOL xD Keep adding ma & la to her sentences. Seriously made us all lmao. Skip skip.

Today actually wanted to talk to gam yu. But then too scared :/ I don't see him smile that often. Maybe cause didn't pay much attention. haha. But even that little smile can drive me nuts :X This name Jiayan and Melissa created for him. Cause we don't want to say his name out loud. Later everyone know who we're talking about. Heh! At first it was fishball. Because his eyes are so big. haha. Then don't know why change to 'gam yu'. And then change again to 'gam yu lou'. HAHAA. But sounds so yam. hahaa. So change back. Hahaha.