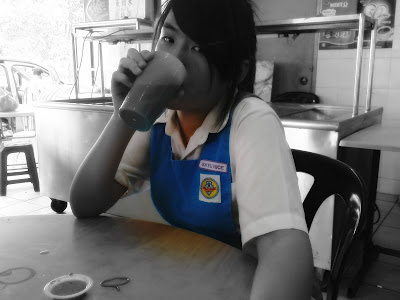 Just back from school. And i'm already on the computer. hahaha. Fast leh?
Today i went to stalked a cute little form 1 girl.
She's so cute when she eat. And she is Ang Kai Chen's mei mei :PP


4Jati
Sub science!
It was suppose to be PURE.
LOL. I shall never survive. So i'm also a bit happy xD
BUT WHAT HAPPENED?
NOW I'M SEPARATED WITH MY BEST FRIEND D:


Today was a lousy day as well. We were all at Dewan Gemilang again. Because we still don't know our class. So the fking teachers force us to play stupid childish kindergarten games. wtf. But, of course i went loitering around the school laa. I won't be so stupid to stay there and play with them. lol. At around 1pm, the teachers stopped with the fugging games and put us all into our 2010 classes. Puan Zalina started with the first class, 4 Cengal. I didn't really cared and didn't even paid attention, as i know my name will never be mentioned. hahaha. But a few moments later, i heard 'Foo Lye Eng , Goh Eunice , bla bla bla'. wtf. Frighten sia. The first thing in my head was 'Ei? Already reach jati meh? Got so fast bo?'. Then i turned around and saw that they were still lining up. We were like shit! Zhen de shi zhong liao! Sat there and started thinking for a while.


After when everyone was put into their classes, which took about 10 minutes?  Puan Chang approached Puan Zalina and the next thing you know she was screaming my name. I didn't really hear her until Melissa told me. So i stood up and she said 'Goh Eunice. Pergi ke 4 jati SE-KA-RANG'. (lol. You know laa, Puan Zalina loves talking like that.) So i changed class. I took a look around and [something/someone] really bothered me. Really pissed me off and made me hen bu shuang. Not going to mention it here. Then I was like wtf? We were separated. She said she won't take up pure science without me. She said she's gonna try to change class. I feel it was a little stupid.


On my way to the toilet, i was keep wondering what had Puan Chang said that made Puan Zalina called me to 4 Jati. A lot of people wasn't satisfied with their new classes. Because it was all messed up. [blank] was very pissed off because [blank2] failed his/her PMR and was a class higher than [blank]. And you know who is the one who choose our classes for us? Its that new teacher that came and replaced En. Ghalib. Pfft ._.


Eugene was very disappointed. Because he didn't get the class he wanted. Enyi was sad because 16passion were separated ): Everybody is unhappy D: Haih.. What to do. What's done is done. But a lot of people said that they are gonna call their parents to come to school tomorrow. hahahaa ! Including [blank]