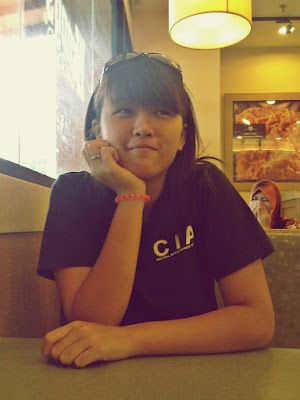 So, our Hari Sukan was today. I've already said before that i didn't want to participate this year. But blame that tall guy. Keep asking me to run run run. Whatever his name is. And i'm a good girl. Will run for my team! Woots! ahahaa. Anyway, today ahh. I macam help people take care of children. LOL. Karyung's, AhJack's & KaiChen's sisters all stick to me. OMG! Make me look like old lady bring kids to school. hahaha!

For your info! We got 2nd for 4x100. Cause whats her name fell down D: And not to mention when she passed that stick thingy to me, it almost fell. So we lost to rumah hijau. Aiks. Next year then. BTW! JIAHUI RAN WITH ME TOO! HAHAHA! After four years of studying here, this is her first time running in this school. lolwtf. *claps claps* The field today was exceptionally wet. A lot of people slipped and fell ): Not going into details. Damn lazy now.

Look at the sky :) Pretty huh?

Look at both of them. Hahhaa. Noob noob dei geh.
hahaaa.