Wednesday, August 28, 2013
About couple weeks ago, my mom saw this dog adoption thing on Facebook posted by some kind people we like to call 'the rescuers'. It's about three beautiful little puppies. These pups went through a hell of a hard time before the rescuers found them.

It was not more than an ordinary day, I guess they were just taking a stroll? When suddenly they passed by a dumpster. They began to hear the howling and crying sounds of puppies. These people started looking up and down, high and low for where the source of the sound was coming from. They threw open the lid of the dumpster and started rummaging through the dirt and bags of garbage. One bag after another when finally they found 3 little pups. Two of them got their poor little tails cut off till even their tail bone were visible. The other one, well, they couldn't even see a tail.

I guess these kind people brought them back, wash them, fed them and gave them a home.

When my mom saw the ad for adoption on Facebook, she just picked up her phone and called him without hesitation. And so, yeah. We went over to the rescuer's house, chit chatted a lil and brought our new family member home with us.

Her name is Bella.
And she is that pup without her tail.

But for now, I'll just call her baby. Until the day she's too big for the name.
She won't get confused, they are plenty more people calling her by her name. haha 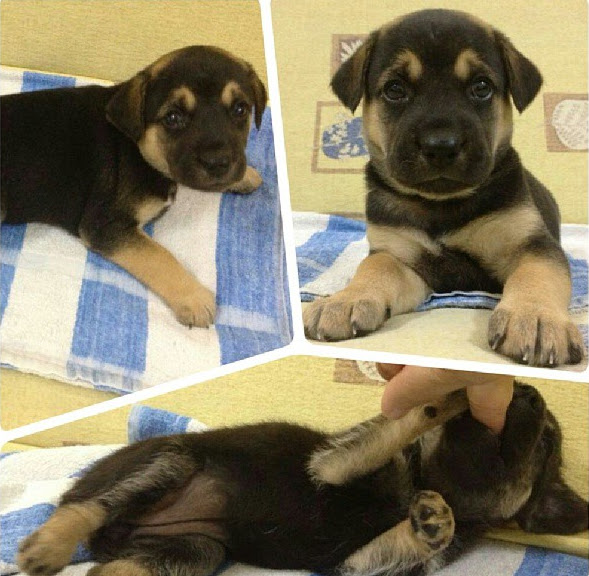 She 7 weeks old and she bites everything she sees. Especially toes and fingers! We put her in her cage when she sleeps. My backyard isn't fully-tiled or cemented. We have lots of grass and my dad mows it every once a month. The corners of my house aren't really visibly sealed, there are shit loads of leave, vines, plants and grass twirling and twining all over the fence. And not to mention my house is on a very big hill, so you can see the world from my backyard.

We have to put her in a cage, otherwise she'd fall off the corners of my house or something. Only until she gets older and bigger and well, until she can't fit through the little hole in the fence. But of course we don't cage her for the whole day. Actually, she's out most of the time, I mean when she's awake.

My backyard is a very 'happening' place. There will always be someone there. Its either my mom cooking, my dad during the laundry or just us wanting to play with her. Haha. But she still has to go in at night. She whines and cries every time we put her back into her cage. I guess she just prefers sleeping on the tiles, under the table rather than being locked up in a cell :(

Oh and if you're wondering about my two other dogs. Bubbles is just a coward. Whenever Bella gets closer to him, he would just get up and run as far as he can. Not because he doesn't want to play with her or anything, just because he is scared.

And Sunshine, well erm, she's really pissed that Bella's around. You know, bitches get jealous. So I guess you can say Sunshine hates her. But I'm sure they'll get along, eventually.