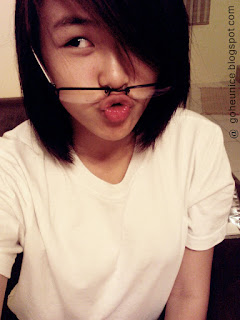 I'm still gonna smile even if it hurts real bad.

i decided, very early on, just to accept life unconditionally; i never expected it to do anything special for me, yet i seemed to accomplish far more than i had ever hoped. most of the time it just happened to me without me ever seeking it.

Such a boring day. Was late for school, reach school around 7.55am. Which was just on time, as exam was already starting. Bm, science and geografi. I stayed in class almost the whole day, as i was just too lazy to move my big, gigantic ass. Listening to Fly, Eugene, Chia Jia, En yi & Daniel talk crap is actually quite interesting. To tell the truth, i feel much comfortable watching you guys smiling and laughing like some mad cow. It brings me joy watching you guys making a fool out of yourselves. Trying hard and making up lame jokes just to cheer me up. You guys really are part of me. I love you maniacs laaa.

I'm coming down with flu, i'm coughing like some crazy woman. Some of my body joints are aching badly. And not to mention i've been sucked on by evil mosquitoes. The itch lasts for about 2 days minimum, i've been scratching alot lately. LOL. Ahhh, i'm done blogging.

I just want to tell you that it’s ok. It’s okay to be scared and angry and hurt and selfish. It’s part of being human.